The London Bridge has been built and rebuilt numerous times throughout history with the first record of there ever being a bridge across the River Thames in 43 AD when the Romans laid wooden planks across rows of anchored boats.  Soon thereafter, they probably decided they needed something more stable and permanent and so a wooden bridge was built. The first documentation of this bridge was in 984 when a woman was drowned at this bridge because people thought she was a witch.

30 years later in 1014, Vikings and Saxons came to invade London in what I assume to be an epic battle (I mean, how could it not be? There were Vikings involved).  As a joint effort, the Viking and Saxons quite literally tore the London Bridge apart.  They rowed up to the bridge, tied cables around the piles and rowed away in separate directions and then… London bridge is falling down, falling down, falling down!

Fast forward a century or so to 1176 when construction started on the first version of the London Bridge made of stone; this bridge was completed 30-something years later in 1209. About 600 years later, after surviving a couple massive fires and the Great Frost, it was decided that a new bridge was needed.  There were many plans presented, but eventually John Rennie’s plans for the London Bridge were decided upon and approved.  In 1825, 100 feet west of the original bridge, the first stone was laid, and construction began.  Six years later, the bridge was completed and the old one demolished.

Between 1902-1904, this bridge was widened in order to accommodate the massive boom in population and traffic crossing the bridge as the train station opened to the south of the bridge.  Then in 1962, the city of London decided that another new bridge was needed – Rennie’s designs did not account for the additional traffic and so the bridge began sinking into the river.

Where did the old bridges go?

Pieces of the “original medieval” bridge can still be found around modern-day London.  Pieces were built into the tower of the St Magnus the Martyr’s Church on Lower Thames Street.  Several of the half-dome stone alcoves are scattered around the city; one can be found in the courtyard of Guy’s Hospital, two alcoves have found their home in Victoria Park, and there is one in Courtland Estates in East Sheen.  Fishmongers Chambers has several blocks from the old bridge as well as a chair made from the original wooden posts.  Lastly, and probably our favourite one, the King’s Arms Pub has King George III’s coat of arms that were previously on the stone gate of the bridge.

John Rennie’s bridge was put up for auction by the City of London – because who doesn’t want a 130-year-old bridge, right?  Robert McCulloch, the founder of Lake Havasu City, Arizona bought it for $2.4 million in 1968 and spent another $7 million and 3 years dismantling the bridge and sending it by boat to Long Beach, California where it was then trucked over to Lake Havasu.  Construction started on September 23, 1968 under the supervision of a civil engineer from Nottingham, England named Robert Beresford who used John Rennie’s original plans to reconstruct the bridge.  Three years later, the bridge was open and dedicated.

If you want to see medieval-era castles, you'd have to go all the way over to Europe, right?  Well guess what! You can find one just outside of - wait for it...

Yes, you read that right.  There is a 12th century Spanish Monastery in Florida less than an hour away from Miami.  Built over the span of 8 years in the Segovia province of Spain from 1133 AD - 1141 AD, the Monastery of St. Bernard de Clairvaux was home to Cistercian monks until the 1830's.  It was then sold off and turned into grain storage and stables.

So how did it get from Spain to Florida?

William R Hearst, who was best known for his work as a big-shot editor and owner of large publication companies like the San Francisco Examiner and the New York Morning Journal, is responsible for bringing the St. Bernard de Clairvaux monastery to the United States. Hearst apparently wanted to build a cabana around his swimming pool with the monastery (kind of excessive, don't you think??). And so he purchased the building in 1925, had it taken apart and shipped to a warehouse in Brooklyn, New York where it sat for over 25 years.

Unfortunately for William Hearst, he soon found himself to be in a bit of financial trouble - probably from buying one too many Spanish monasteries - and had to auction off most of his collection of art and assets, including the St. Bernard de Clairvaux.  In 1952, a year after Hearst died, two gentlemen named W. Edgemon and R. Moss bought the pieces of the monastery and had it rebuilt in its current location just outside of Miami, Florida as a tourist attraction.

In 1964 it was sold once again to Colnel Robert Pentland Jr. who then gifted the monastery to the Bishop of Florida.  Today, the monastery is still operational with services held on Sundays and weekdays in both English and Spanish, and is also a popular tourist destination. 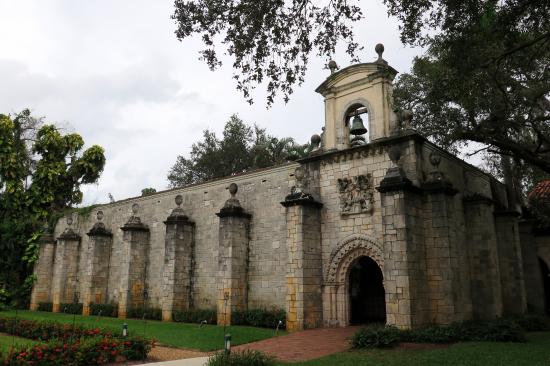